Before he went to work today, Steggy picked up pastries at Boulangerie Nantaise down the street from his apartment. What a great host, right?

Then it was time to get in the car and drive down Route 5 to Olympia, WA, to the State Capitol building. I was getting bored of pictures of our faces, so I shoved my iPhone in Harrison’s hands and proclaimed, “Take a picture while I jump up and down!!!!” 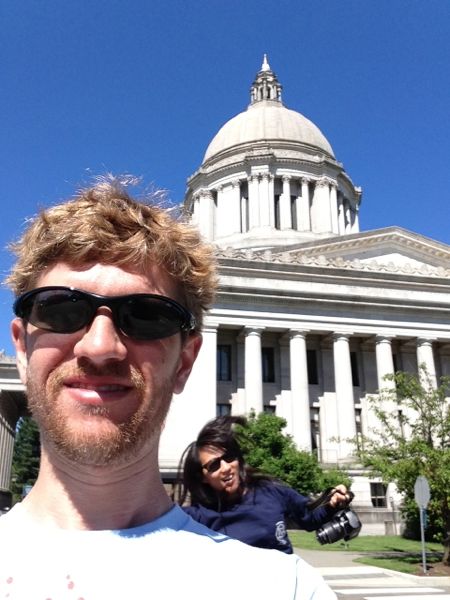 And lunch at Cafe Yumm in Portland, OR. We wanted to go by the famous Voodoo Doughnuts, but the line was way out the door. Instead, we went to Stumptown Coffee Roasters so Harrison could get a teeny-tiny mocha for the road.

(Check out the creepy gloved hand on the door behind him…) 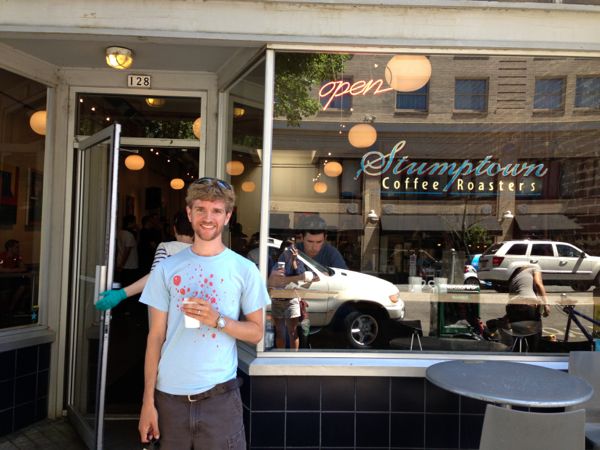 We continued down the coast to Salem to photograph Oregon’s State Capitol as well. Steggy’s girlfriend Megan had warned us that it’s pretty ugly, topped with a golden lumberjack statue (which, from far away, resembles a giant golden dong).

Harrison is not sure how he feels about the building. I like it a lot!

“Suddenly” (but really, a long time later), we entered northern California and got our first glimpse of the famous redwoods.

All day, the temperatures outside had been climbing steadily. Somewhere in southern Oregon, the car thermometer reached 100 degrees. Once we crossed the mountains in northern California though, the temperature dropped precipitously. When we emerged from the redwoods on the coast, it was in the mid-50’s and gray as a zombie apocalypse movie.

We’re spending the night in Crescent City, CA, which is a small town of 7,500 right on the coast of California. It’s apparently quite prone to tsunamis, so that’s just awesome.

I have to say, this town gives me the willies. Even though I’ve seen plenty of gray skies, the fog and clouds are oppressive and make everything look desolate–like out of a horror movie. And being somewhere that’s just so far away and different from “home” just gives me an uneasy feeling, even though I know that’s totally irrational.

Our hotel (The Curly Redwood Lodge) is a time machine to the 70’s. There’s brown shag carpet, and the interior is all “rich,” dark wood. According to the sign out front, the entire building is made from wood sourced from just one curly redwood tree, hence the name.

And it is no way creepy that our room has a locked door! (No worries, parents, the hotel has good reviews! We’re safe!) 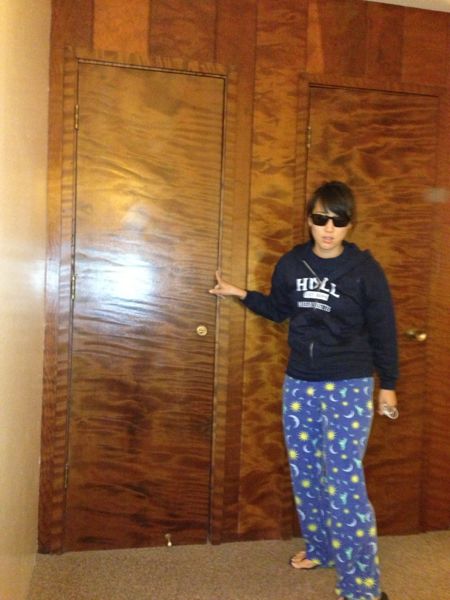 Tomorrow, we drive down the Pacific Coast highway. Harrison will enjoy this immensely. I will be clinging to the “Oh shit” handle on the side of the door!

Also, we discovered today that the windshield has developed a significant crack (about a foot long) at the bottom. Any advice on how to deal with this? How much does replacement cost? Does insurance cover it? How long will it take to get this replaced?