First, someone gave us several suggestions for the WVT playlist using the pseudonym “<3” but did not leave any contact information. We don’t know who “<3” is, so drop us a line (leave a comment or send an email!) if that was you! [Or, stay anonymous. A WVT mystery!]

Sorry for the delay in posting! It has been a busy few days during which we left the East Coast and returned to the Midwest (temporarily).

We are just over two and a half weeks into WVT. Here are some stats:

On Friday morning, we got up early to say good-bye to Kristen, our very cool Brooklyn host. This picture doesn’t really do her justice, though you can see her pretty sweet platinum hair. I met Kristen when she TA-ed for the media studies class I took my second year of college. She is now working at Al-Jazeera English in Manhattan (one of her many impressive positions–she changes venues at least once a year). She also founded Saucy mag and runs a visually and mentally stimulating tumblr. Though she is not my TA anymore, she continues to be a mentor and an inspiration in the way that she lives life–fully and with joy, pursuing things that she is passionate about. I’m always excited to see what new project she’s working on! 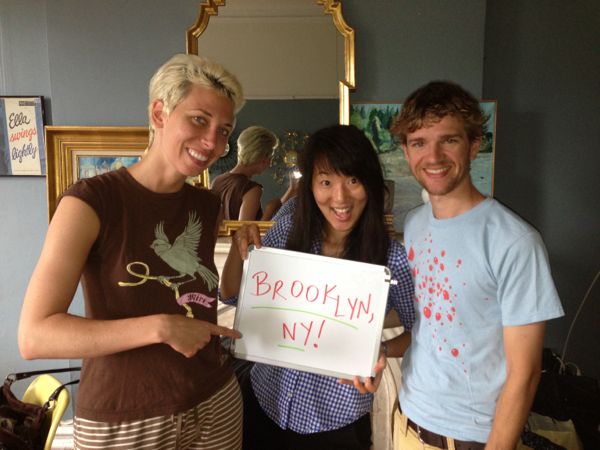 Here’s something fascinating we discovered about life in New York City. I grew up in a city, and on street cleaning day, all residents would move their cars for the two designated hours once a week. The same thing happens in Brooklyn, except that there aren’t enough parking spaces. Instead, residents just move their cars to the other side of the street and double-park them, blocking in the legally parked cars for two hours. When you think about it, it’s a very efficient system, as long as people know that they can’t move their car for those hours. (But I mean, who has a car in New York anyway?)

Friday was street cleaning day for the side of the street where we were parked, so we headed out early, just in time to cross over Manhattan island during rush hour. It actually was the easiest part of driving in the New York metro area, but when we crossed Manhattan bridge, I was scared.

Once we were out of New Jersey, it was a straight drive across desolate Pennsylvania (Seriously, food desert!) to Medina, OH.

Medina (near Akron and Cleveland) may seem like an odd destination, but it is home to one of the coolest families we know! In May, we attended Jessica and Matt’s wedding at the Amangani resort in Jackson, WY, and our trip was made possible by the generosity of Jessica’s parents, Chip & Jean. So, of course, when we were also invited to their reception at Jessica’s home, we were game to attend!

Jessica’s dad designed their home. Isn’t it cool? It even has a spiral staircase that I love going up and down.

On Saturday, several of the former grad student guests (That’s us now, too!) went on a morning run along the towpath in Cuyahoga Valley National Park.

And then we did things like shave and put on fancy dresses because it was party time! (We also played several intense rounds of Banana-grams. Jessica’s mom is a whiz. I, meanwhile, get caught up on words like “jut.”)

It was an honor to be included in this even with so many of Jessica and Matt’s family and friends. Having stayed with Chip and Jean three times (and I’ve stayed with her aunt and uncle twice!), I really feel like a part of the family.

At dinner, I got talking to one of the neighbors who is a retired umpire. Harrison found this rather amusing as I know basically nothing about sports. As he showed me his World Series ring, I nodded knowingly and kept silent about my utter lack of baseball knowledge.

We eventually made it out to the s’mores bar around the fire pit. Matt (the groom), for whatever reason, looks particularly surprised to be caught in the act of roasting four marshmallows at the same time.

Though their wedding was almost two months ago, I still clung to my “MOH” [Maid of Honor] title as if my life depended on it. It’s really my only title right now (other than self-titled “Modern Face of Temperance”), so ain’t nobody taking MOH away from me. Jess, I’m your MOH for life! 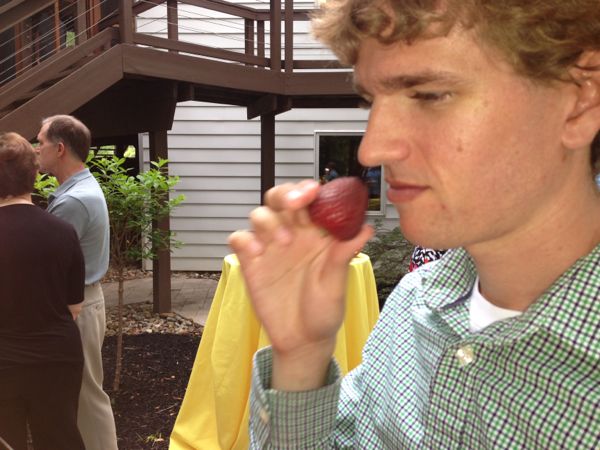 But that’s okay because these cupcakes are delicious!!!

We also got to spend time with Matt and Nicole, two chemistry PhDs and also “retired grad students.” I didn’t realize that we hadn’t seen them since Jessica’s graduation last year, so it was great to catch up. Matt tried to sell us on jobs in Portland, and Nicole almost (but not really) made Arizona sound like a nice place to live, mostly because I’d like to see a saguaro cactus. 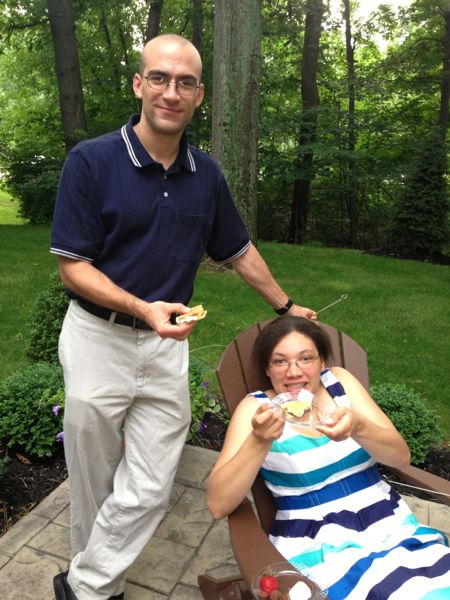 Unfortunately, I was too busy meeting people and stuffing my face with food to take many pictures of the party. So you’ll have to believe me that it was a great event, and Harrison and I had a wonderful time.

This morning, I got to spend some quality time with Jessica’s parents. And also, with their goofball lab Scout:

Dorothy, on the other hand, is not my biggest fan. It offends her when I do things like…walk up the stairs and try to exit a bedroom. Harrison is endlessly amused by this and likes to point out that she has never been “anything but sweet” to him.

Here’s to the happy couple, Jessica and Matt! They beat us to the altar by 20 days. I’m pretty sure that being married in the same month and year means that we have to stay friends forevaaaaaar, right? 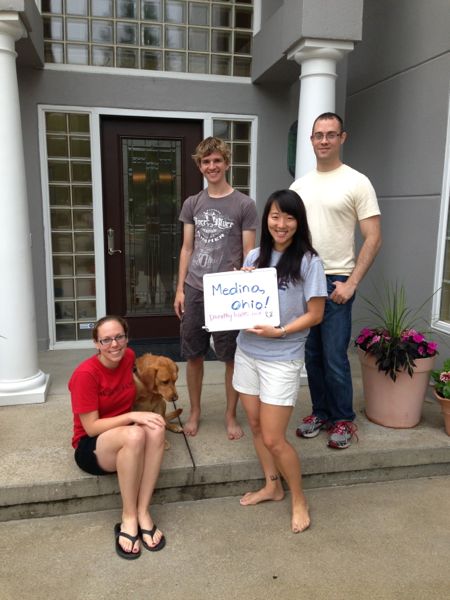 The whiteboard says “Dorothy hates me.”

After eight and a half hours of driving, we’re in St. Louis (“the Loo”) with our high school/college friend Rohan. And now it’s very late, so I’m going to bed.