On the way out of South Dakota this morning, we saw a lot of sick-looking trees. As we are very nearly city slickers, I have no idea why all these trees have been reduced to trunks on the ground without needles. Is this the evidence of a fire or a controlled burn where the grass has grown back?

So Wyoming is rather empty:

Just miles and miles of scrubby hills and buttes and rolling plains. Harrison really likes all the scenery because it’s so different from the deciduous forests and green spaces on the East Coast. He likes things that are different. I prefer things that are the same, so I’m viewing these landscapes with a…wary eye. (Not really, but I am weirded out by how scrubby everything is here.)

Speaking of plains, we visited the monument at Little Bighorn, “a place for reflection.” We reflected on how awful it would have been run up and down the hills, in hot military uniforms, among other things. I don’t say this is as a joke. I really can’t imagine being in this landscape without an air-conditioned car and paved roads. It seems so inhospitable here. The car thermometer reached 100 today! 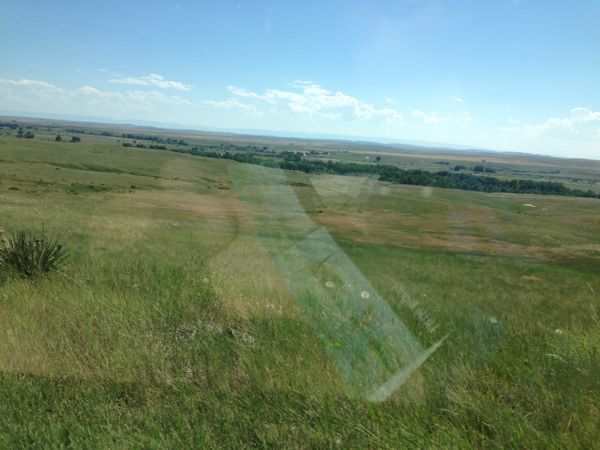 In the early evening, we visited Prairie Dog town, which I kept calling “Meerkat Manor.”

And suddenly, the rolling plains gave way to mountains (and also, pizza flags outside the restaurant where we ate dinner).

We’re staying in Livingston, Montana, at the Livingston Inn, a hilarious Western-themed motel. It’s interior is mostly wood, with tons of pictures that the owners have taken of wildlife in Yellowstone. There is also one channel on the television with a looping six-minute movie about the motel, including the time the owners brought a grizzly bear into the motel to take pictures. Unfortunately, the video does not appear to be looping right now. Oh, thank goodness, it’s available online!

People in Montana are quite proud of their state, apparently:

I finished the day with a milkshake from Mark’s In & Out. Now that the sun has set, it’s quite pleasant outside. 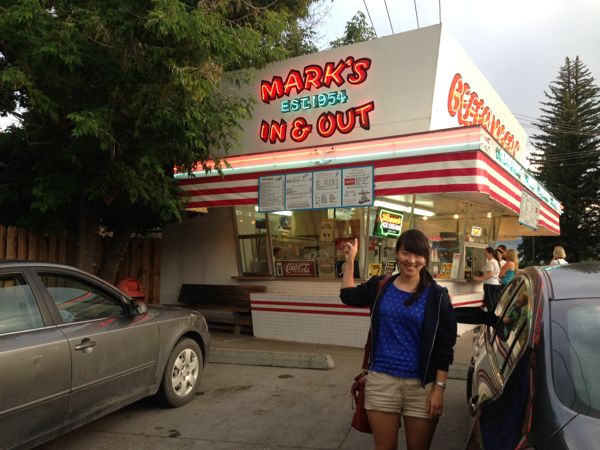