It may seem daunting to try and plot out a roughly 10,000-mile trip, and I suppose it was, but there’s really nothing earth-shattering about what I did.  I estimated how long it would take us to drive between cities in which we were staying with friends/family, and once the dates in those cities were hammered down, I planned the routes between them.

It turns out I was not great at estimating; I had to insert an extra day in the Chicago-to-Seattle and San Diego-to-Austin itineraries because I wanted to see everything between those pairs of cities, and for some reason, the major landmarks are not arranged along a straight line between them.  I decided that averaging any more than 7.5-8 hours a day may provoke a mutiny attempt from the passenger’s seat, so I used that constraint to decide where to stay each night along a predetermined route.  This is how we ended up planning stays in the burgeoning metropolises (correct plural?  I don’t know.) of Custer, SD; Livingston, MT; and Artesia, NM.

I regrettably had to leave out certain landmarks/parks/fun roads, for the sake of time.  That includes the Grand Canyon, among other places.  I know, this is where everybody is screaming at their computer/tablet/phone, “WHAAAAT?!? YOU CAN’T GO ON A ROAD TRIP WITHOUT THE GRAND CANYON!!  THAT’S THE ONLY PLACE PEOPLE ACTUALLY GO ON ROAD TRIPS!”  I know, it seemed weird to me, too.  It turns out it’s just not on the way to anywhere (it’s basically an out-and-back from Flagstaff), so I axed it.  We’ll take another vacation one of these days to see all the holes in the ground out there.

Now being two days into the trip, I must admit there are times when I wonder what we were thinking.  I love driving, but it really is a lot of driving.  Fortunately, I tricked somebody into riding shotgun with me for the rest of eternity, so I think it’ll be ok. 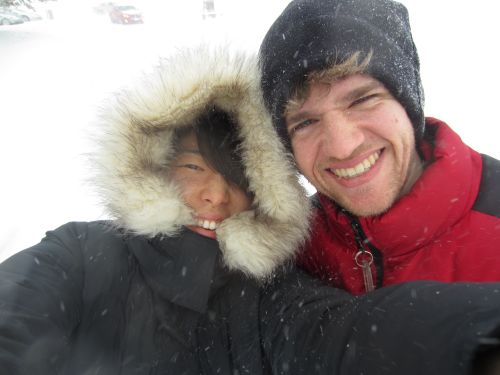 It snowed a foot here on Sunday. I am excited for summer and driving to places that are warmer and prettier than Champaign, IL.

Today, we are two months out from getting married, hooray! And we are 79 days out from the kickoff of Wedding Victory Tour! Here is a list of rough tour dates where we have confirmed that we will be couch-surfing with some very generous friends and family. If we are coming to a city near you, feel free to drop us a line, and we will try to meet up! We’d like to see as many of you as possible as we make our way around the country.

5/24-6/11 – Celebrate with friends and family around Virginia