We’re sure that you have not googled the answers and are dying to hear the winner of our WVT trivia contest! Here goes…

We managed to see license plates from all 50 states over the course of the tour, but finding them was more difficult than we anticipated. What was the last license plate that we found?

-The last license plate we saw was surprisingly not Alaska (saw it in Seattle) or Hawaii (saw it in Phoenix). It was Alabama! We didn’t catch it until July 26th.

As you saw, we are trying to photograph ourselves in front of every state capitol building (though not all on this trip, obviously). On WVT, we took pictures in front of the capitols in the largest AND smallest state capitals by population. Name them.

-By population, the largest capital is Phoenix, AZ:

-And the smallest is Montpelier, VT:

We crossed the continental divide in two states. What were they?

-We crossed the continental divide in Montana (Logan’s Pass in Glacier National Park) and New Mexico.

We saw rain when we ate lunch in Yuma, AZ. On average, how many inches of rainfall does Yuma get in the month of July? (We’ll give it to you if you’re reasonably close.)

-This was surprising! Yuma gets on average a quarter inch of rain each July…and we happened to arrive right after its one annual shower, haha. In case you don’t believe us:

Tie-breaker: We estimated that we would drive 10,000 miles over the course of WVT, but the final mileage ended up being more than we anticipated. Estimate what our total mileage was for the entire trip from June 12th to August 3rd.

For the bonus puzzle, click here for the answer. We had one entry. Nice job, Matt! (Keep a look-out for a stylized representation of tongue-out Bodger in the solution!!)

How did your answers compare? Did you learn something about our vast and varied country? We hope so!

And the winner is….

Congratulations, Ryan! We will be mailing your prize eventually.

Thanks to all of the other entrants!!! 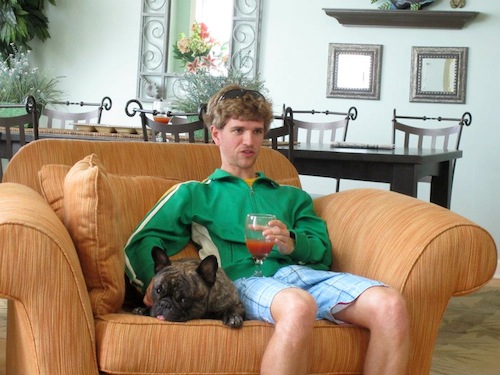 Harrison likes to ask questions and then answer them.

What is Wedding Victory Tour? Rather than hosting a large wedding ceremony and reception for all of our family and friends, Mica and I have decided to have a small courthouse ceremony with immediate family, followed by a cross-country (+ Canada!) roadtrip during which we will visit our various disparately-located family and friends.

Why don’t you want to have a traditional wedding, like normal people? We are rather abnormal people.  Namely, we would find spending the better part of two months bopping around in a car more enjoyable than hosting a massive party for family and friends.

What is wrong with parties? Nothing!  Given the choice, though, we would rather have many small gatherings with individual family and friends than one huge bash.

The thought of spending that long in the car with any one human being makes me ill. Please phrase in the form of a question.

Why in the world would anybody want to do this? We love travel, roadtrips in particular.  I (Harrison) love driving, and Mica loves passenger-ing.  We have driven back and forth from graduate school in Illinois to our parents’ houses in Virginia many times, and we recently completed a 2500-mile roadtrip around the middle of the country, so this ain’t our first rodeo, so to speak.  We are excited to see whether our astronaut diapers will hold up for the duration of this significantly longer journey.

When is this happening? We will set out in early to mid-June and make our triumphant return in late July or early August.

Where are you planning to go? Roughly, we are planning to make a counter-clockwise loop around the continental US, along with a bonus excursion to the Canadian maritimes. [Mica’s edit: I want to take WVT to the UK, but I’m pretty sure we can’t drive under the ocean. Womp, womp.]

Isn’t this rather environmentally unfriendly? Yes and no.  It will certainly have a significant carbon footprint, but so does flying.  A 10,000-mile trip in a reasonably fuel-efficient car emits about as much carbon as two passengers flying roundtrip from San Diego to Richmond, VA.  We have three family members in San Diego who would have likely been invited to a traditional wedding.