We traversed the great state of South Dakota today on our trek to the West Coast.

Our first stop? The Corn Palace in Mitchell, South Dakota. I imagined that this would be a structure built entirely of corn, so suffice to say, I was disappointed when I realized that the palace is only decorated with murals made of corn. Impressive, still, I guess….

Unlike, um, everyone else, the Corn Palace is quick to advertise how awesome it is that tons of non-edible household products are made of corn. Bottles and shampoo made out of corn? That’s just a modern marvel of technology, says the Corn Palace.

From there, we drove to and photographed the SD State Capitol in Pierre (the second smallest state capital in the US!).

I’m not sure how/when we’re going to photography the North Dakota State Capitol because I don’t see us coming back to the plains any time soon. 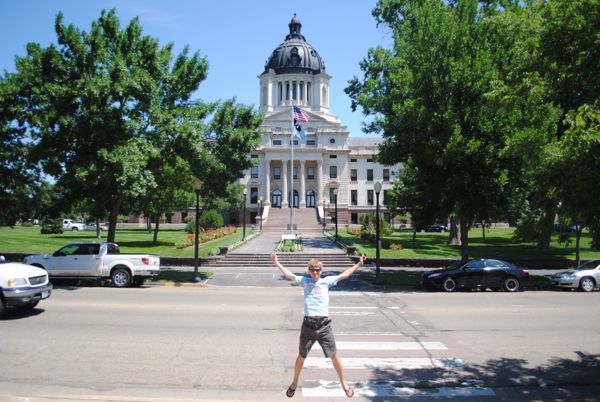 All along the state’s highways, there are signs for Wall Drug, a huge roadside attraction. By the time we arrived, I had lost count of the number of signs we’d passed for it.

Wall Drug started as a drug store in the 1930’s and became famous because its proprietor offered free water to any passersby. Today, it is a gigantic tourist attraction with enough gimmicky shit to make your head spin. We got free water, but we passed on the plaster eagle busts and Native American statuettes.

Note to newlyweds: Wall Drug Café gives you two free doughnuts if you’re on your honeymoon! 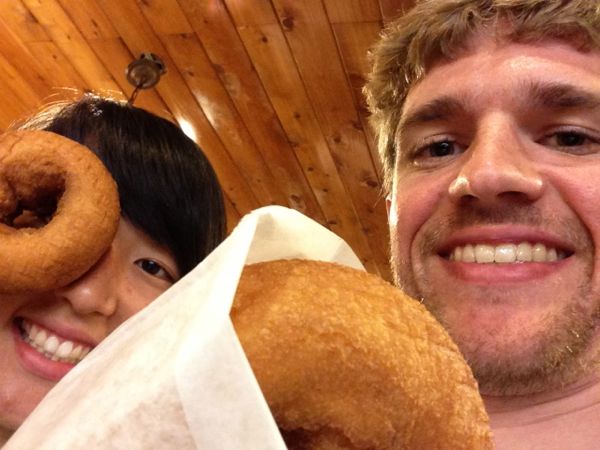 Honeymooners also get free coffee, but as a cup normally costs $0.05, that’s not a huge deal. In fact, we both paid for our two cups of coffee; I guess we donated $0.10 to Wall Drug. So generous, I know…

Then it was time to enter Badlands National Park, which was free to enter with the annual parks pass that we purchased in Maine. Here’s what I knew about Badlands before entering: Absolutely nothing.

The carved out rocks were amazing to look at, and we had some excellent vistas from the many lookout points around the park loop. I kept thinking about what a miserable and inhospitable place this must have seemed like for the settlers who crossed this area.

If I were just trying to get to Oregon, I’d see this and think “Shit.” (But let’s be honest, I probably would have died of dysentery by this point anyway.) 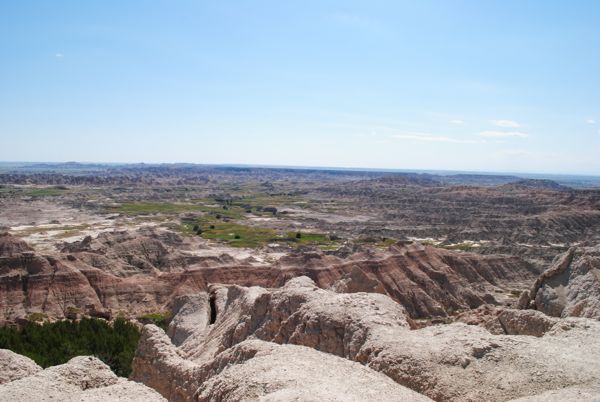 I was ready to write off Badlands as a hot (sweat in my bra strap, ewwww!) and rough-hewn place, but I followed the park pamphlet’s instructions to let “the Badlands reveal themselves.” In the <60 minutes that we sped through the park, several prairie dogs revealed themselves to us, and I was very excited. (No pictures though.) 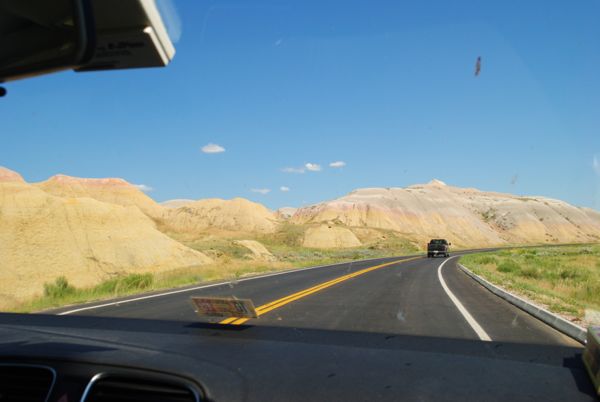 The final stop was, of course, Mt. Rushmore. (I say “of course,” but I had no idea it was in South Dakota. My knowledge of US geography is the absolute worst.) 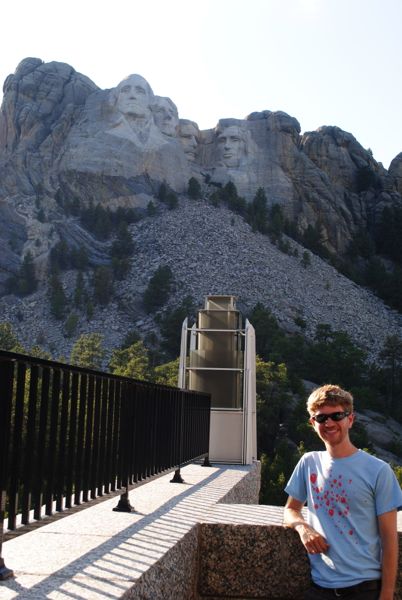 I was pleasantly surprised by how cleanliness and nice layout of the viewing area. It’s “free,” but you have to pay $11 for an annual pass to park in the lot. I mean, what the frick?!? The man who sold us the pass smiled when he said that we could use it for the rest of 2013, but I don’t think we’re coming back to Mt. Rushmore this year.

But anyway, I made us practice our “serious” faces in case they one day want to add our likenesses next to Washington’s.

And now, we’re in Custer, SD, where we had an infuriating dinner involving a bait-and-switch “stout” beer and a clueless waitress. (I’m talking to you, Buglin’ Bull Sports Bar!)